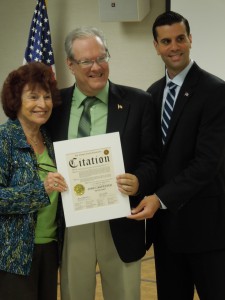 On June 7, 2013, the Library hosted a Classic Film Series program entitled Carpenter On Carpenter.  On a typical Classic Film Series afternoon, Mr. John Carpenter usually pulls a classic film or two out of his vast collection and shares these lost gems with all of us.  Instead, the Library’s Public Relations Director, Jude Schanzer, decided to recognize the filmmaker, not the resident film historian.  Mr. Carpenter’s award-winning silent film Late To Lunch was shown along with his documentary Smelling Like A Rose, which examines how Mr. Carpenter mentally and physically overcame the disastrous effects of being hit by a speeding automobile.  Before the films were shown, Mr. Carpenter was presented with a Citation from Nassau County Legislators Norma Gonsalves (Presiding Officer, District 13) and Michael Venditto (District 12) for his work in promoting and preserving classic films.  He was also recognized by the Lady of Lourdes Youth Group for his work at this Massapequa Park parish.  Mr. Carpenter has been the Library’s Classic Film Series facilitator for nearly ten years.

Join us for a fun and lively discussion about friendship and hope in Katherine Applegate’s Newbery Award-winning novel The One and Only Ivan.  Banana splits will be served in honor of Ivan, the main character, who just happens to be a gorilla!  Books will be available for check out a the Children’s Desk when registration begins on Friday, July 19th.